Thirty-three years after the British settlement at Port Jackson was established, three small ships set sail from Sydney with a cargo of soldiers and convicts to found a new penal settlement on the Hastings River. The ships, under the command of Captain Francis Allman of the 48th Regiment of Foot, were the Lady Nelson, the Mermaid and the Prince Regent.

It was early in March of 1821 that the masters of the three vessels were ordered to prepare to transport soldiers, convicts and six months of supplies to the Hastings River. The river and it’s harbour, which surveyor John Oxley named Port Macquarie, had only been ‘discovered’ in 1818. Further explorations in 1819 and 1820 confirmed the suitability of Port Macquarie as an ideal penal settlement for  secondary offenders and convicts of the “worst kind”.

The voyage to Port Macquarie, normally a three day sail, took the three ships twenty-eight days due to gale force winds which enforced a fourteen day lay-over in Port Stephens. Having left Sydney on the 21st March they arrived off Tacking Point on the 6th April. They were unable to cross the bar due to dangerous seas, so they sheltered in Trial Bay. Eleven days later they left for Port Macquarie arriving on 17th April 1821.

The Lady Nelson was the first to cross the bar and anchored safely. Next to try to enter was the Prince Regent, with Captain Allman and family on board. Unfortunately she struck a submerged rock at 7:30pm , and sustained damage to her hull and rudder before joining the Lady Nelson. The Mermaid lay outside until the next day when she too encountered problems on the bar. Becoming stuck fast on the bar around midday, she was pummeled by the breakers and it seemed all was lost until she managed to float off at 8pm with a damaged stern plank and the rudder lost.

The first European settlers had now arrived at Port Macquarie but all three vessels had suffered some degree of damage. 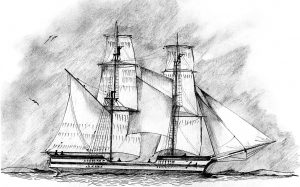 The Lady Nelson was a 61 ton Brigantine (Brig) built at Deptford, England in 1799.She had a length of 52 feet 6 inches (approx. 16 metres) and was 17 feet 6 inches (approx. 5.3 metres) wide and carried six guns. A unique facet of her design was the use of three sliding keels to facilitate survey work in shallow waters. Originally built for the Transport Board, fears of a French exploration voyage to, and possible annexation of, the southern coasts of Australia caused the Admiralty to hastily engage and refit the Lady Nelson as an armed tender.

The Lady Nelson played a distinguished role in the exploration of the southern coast of Australia. She was the first vessel to traverse Bass Strait from west to east and arrived in Sydney on December 16th, 1800. She soon set sail to chart the coast between Cape Otway and Wilsons Promontory and returned to Sydney several months later. Shortly afterwards she sailed for the Hunter River and returned in late July with coal and cedar. A trip to Norfolk Island preceded her most illustrious voyage; the charting and exploration of Port Phillip Bay.

In 1802 she received orders to act as tender to Matthew Flinders’ ship the Investigator to chart the Torres Strait. Both vessels, however,  sustained sufficient damage to force their return to Sydney. The next few years saw the Lady Nelson acting as a supply and transport ship on voyages to the Hawkesbury River, Port Phillip, Norfolk Island and Tasmania. In 1806 she returned a high ranking Maori Chief, Te Pahi, to the Bay of Islands. After returning to Sydney she again acted as a general transport over several years until late 1811 when Governor Macquarie selected her to carry him on a voyage to visit “every inhabited part of the Territory”.

Fearing French interest in the new territories, the Lady Nelson was again being prepared for survey work along the northern coast but was replaced by the Mermaid. This is when the future Port Macquarie figured in the life of the Lady Nelson. In 1819 she was selected as the vessel to carry John Oxley and his party to survey the Hastings River as the possible site of a penal colony. Oxley’s favourable report to Governor Macquarie saw plans for the “place of banishment” for secondary offenders drawn up, and the fate of the Hastings was to be irrevocably changed some four years later when the Lady Nelson, with Captain Francis Allman in command, set sail from Port Jackson along with the Mermaid and the Prince Regent. Their cargo of convict labourers, soldiers and other crew were to arrive at the Hastings River in April 1821 to begin the settlement that was to become Port Macquarie.

The Lady Nelson left Sydney in 1824, in company with the vessels Countess of Harcourt and Tamar, to establish settlements in the far north-west of Australia. This was to be her final voyage. After taking formal possession of Bathurst and Melville Islands, and establishing a settlement at Port Essington, Lady Nelson was tasked with procuring supplies from the neighbouring islands around Timor. On what was to prove to be her last voyage, an incident involving local Malays saw the massacre of all but two of the crew and the Lady Nelson was run aground at Baba, in the Serwatti Islands, where she was burned. 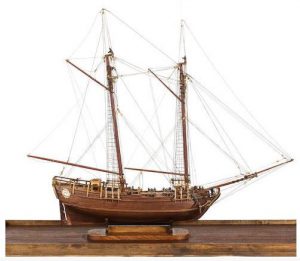 During the war of 1812 between Great Britain and the United States, the King of the Sandwich Islands (Hawaii), Kamehameha, who considered himself a subject of the King of England, offered safe harbour and supplies to British warships. As was the island custom, he asked for a gift in return. King Kamehameha especially wanted a western style vessel to travel in between the islands.

Captain Tucker, of HMS Cherub, one of the visiting vessels, urged the Admiralty to supply the King with a small vessel as a means of retaining favour after the war concluded. The Lords Commissioners of the Admiralty considered the request and on July 27, 1815, Lord Bathurst wrote to Governor Macquarie requesting that a small vessel be built and presented to King Kamehameha in the name of his Highness, the Prince Regent. Macquarie acknowledged the request on March 18, 1816 but it would be another four years before the vessel was ready to sail.

The Prince Regent, a colonial built schooner of 40 tons, launched at His Majesty’s dockyard Sydney on 7th April 1819.

Before handing over the vessel to King Kamehameha, the Prince Regent was to be used to continue the exploration of the New South Wales coast, before the French could do so. The Mermaid was chosen for this task. The Prince Regent did, however, sail to New Zealand for ships timbers, carried despatches around the colonies, and was one of the first three ships to transport convicts and marines to the new settlement at Port Macquarie in 1821.

The Prince Regent, accompanied by the Mermaid, sailed for the islands on October 16, 1821. Captain Kent formally delivered her to King Kamehameha II (Kamehameha had died two years earlier) on May 1, 1822. Her time in tropical waters was to prove short as she was wrecked a few months late on the east coast of O’ahu. 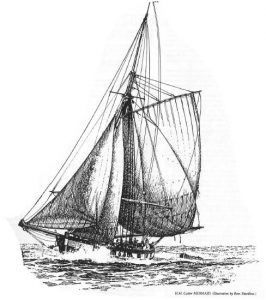 H.M.S. Mermaid was a single masted, copper sheathed, iron fastened cutter of 84 tons. Barely 18 metres in length and under 6 metres widw she had a draught of 2.7 metres. The Mermaid was built in India in 1816 of Indian teak and commissioned in October 1817.

The Mermaid was purchased by the Royal Navy for surveying expeditions. Phillip Parker King , who became one of Australia’s greatest maritime surveyors, made four voyages between December 1817 and April 1822 with the Mermaid being his vessel for the first three. During these expeditions she visited the south coast of New South Wales, Western Australia, the north coast of Australia, called at Timor, Van Diemen’s Land (Tasmania), and accompanied the Lady Nelson, with John Oxley aboard, to further survey the Hastings River in 1819.

The Mermaid proved to be an excellent coastal survey ship and in July 1820 again set off from Sydney headed for the north-west coast of Australia. While sitting off Port Bowen in Queensland the Mermaid ran aground. The crew managed to get her back to sea but considerable damage had been done. After some repairs she again headed off for the north-west but was taking too much water to continue. King decided to return to Sydney.

The colonial government then took possession of the Mermaid and, after a re-fit, she continued in service as a survey ship for John Oxley on voyages to Moreton Bay and the Tweed River. She was also used to supply the penal colonies at Norfolk Island and Moreton Bay while also travelling as far as New Zealand, Tahiti and Hawaii.

Her most significant role in our local history was when she was selected as one of the three vessels to proceed from Sydney in 1821 to establish the settlement at Port Macquarie.

In 1829, under the command of Captain Samuel Nolbrow, she sailed for Western Australia via the north-east coast of Australia. Risking passage through the inshore route of the Great barrier Reef, the Mermaid ran aground and was wrecked on 13th June 1829.