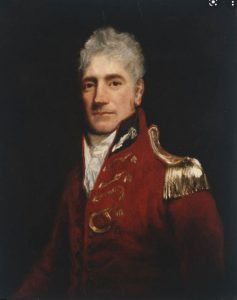 Governor Lachlan Macquarie (1762-1824) was a Scottish born military man and administrator who served as Governor of New South Wales from January 1810 to December 1821.  The situation in the Colony was concerning to Great Britain after the unrest of the Bligh administration and Macquarie was instructed to: “improve the Morals of the Colonists, to encourage Marriage, to provide for Education, to prohibit the Use of Spirituous Liquors, to increase the Agriculture and Stock, so as to ensure the Certainty of a full supply to the Inhabitants under all Circumstances” ( Castlereagh, Secretary of State for the Colonies, to Macquarie 1809).

Macquarie and his wife, Elizabeth, left England on 22nd May 1809 aboard the store ship Dromedary for a voyage that took seven months. They arrived in Port Jackson on 28th December 1809 and Macquarie was sworn in as Governor on 1st January 1810.

During Governor Macquarie’s tenure the site of the future Port Macquarie was discovered by John Oxley and it was deemed as a ‘suitable place of banishment’ for secondary offenders in the colony. Macquarie appointed Captain Frances Allman to lead the expedition of soldiers and convicts to found a penal settlement at the mouth of the Hastings River in April 1821. Allman dispatched  a number of reports on the state of the new settlement back to Macquarie who determined that he would inspect Port Macquarie later that year. 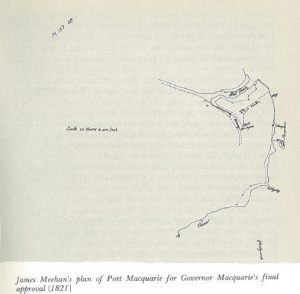 Governor Macquarie set out on board the brig Elizabeth Henrietta on 1st November 1821 to inspect the new settlement. He was accompanied by Lieutenant John Oxley and Deputy Surveyor James Meehan. Macquarie directed where certain government buildings were to be constructed and Meehan drew a plan of Port Macquarie for the Governors approval. Over the coming years, as the town grew, new maps were created that show the development of the setlement.

officers and men of the first fleet

In 1821 Governor Lachlan Macquarie appointed Captain Francis Allman, of the 48th Regiment of Foot, as first Commandant and Magistrate of the proposed settlement at Port Macquarie. There were to be eleven further Commandants after Allman before the district was administered by a Resident Magistrate.

Born on 1st November 1780 in County Clare, Ireland, Allman enlisted in the British army in 1794 and served through several campaigns including Holland, Egypt and the Iberian peninsular. He was wounded and captured at Albuera (1811) and was imprisoned until 1815. With his wife Sarah and three children he sailed with the 48th Regiment on the Minerva, arriving in Sydney on 30th April, 1818. He was chosen by Governor Macquarie to lead the development of the Port Macquarie penal settlement and remained as Commandant and Magistrate until recalled in April 1824. He later held government positions in Newcastle, the Illawarra, Goulburn, Campbelltown and Berrima. Allman also tried his hand at farming without success. He retired to Yass in 1844 and died there on 24th October, 1860.

Lieutenant William Earle Bulwer Wilson , brother of Allman’s wife Sarah, arrived in Australia with Allman on the Minerva 30th April/1st May 1818. He was born at Chatham in Kent, England, on 15th September 1797. By  1813 he was an ensign in the 63rd Regiment of Foot. He quickly rose to the rank of Lieutenant and transferred eventually to the 48th Regiment of Foot. He was appointed by Governor Macquarie to go to Port Macquarie with Allman in the position of Engineer and Inspector of Public Works, a position he held until replaced by Lieutenant Carmac on 2nd May, 1824. He was made a Captain and married Miss Mary Honoria Brooks at Campbelltown in January 1828. He served in the East Indies before falling ill and returning to England where his daughter was born. Wilson later served in Tasmania before leaving in 1834 for Madras, India, where he died after contracting an illness.

Abraham Fenton also arrived with Allman in 1818. Fenton served in the Napoleonic Wars from 1793 to 1815. He was appointed as Hospital Mate in 1815 and promoted to Assistant Surgeon with the 67th Foot in 1816. After arriving in Australia he was employed as Assistant-Surgeon for the 48th Regiment and was posted to Newcastle in that capacity in 1820. He was selected by Governor Macquarie to be the Surgeon at Port Macquarie in 1821. He was replaced as Surgeon in 1824 by Francis Moran. Fenton left Sydney for Madras, India, in 1824 where he contracted an illness and died on the 2oth May 1825.

Born in 1793 in Somerset, England, Partridge enlisted in the British Army in 1811 with the 46th Foot (South Devon Regiment). Partridge arrived in Australia in 1814 aboard the ship General Hewitt as a Corporal with the 46th. He also saw time with the 48th. During his army service he accompanied Oxley and others on explorations into the continent before resigning from the army to take up a colonial civilian appointment as Overseer of His Majesty’s Lumber Yard in Sydney. Stephen Partridge was appointed in 1821 by Governor Macquarie to be the Superintendent of Convicts and Public Labour at Port  Macquarie. Partridge’s time as Superintendent was marked by controversy and he resigned from this position in 1830 to take up a license to the ‘New Inn’ public house. Stephen Partridge died in Port Macquarie  on the 18th July 1878 and is buried in the Historic Cemetery.

Further biographical information on the other ranks

Also accompanying the men were the following: