Totems of the Birpai

The Birpai people are the traditional custodians of our local country. The country was created during The Dreaming when the Ancestral Beings wandered, forming the rivers, mountains, plants, animals and other natural features. The Dreaming is a powerful life force that connects Aboriginal people to the land and to a complex system of spiritual beliefs and cultural practices.

Totems classify all things including plants, animals, birds and people. They provide a link between the natural world and kinship relationships with spiritual beliefs and personal responsibilities.

Families and individuals have totems which are determined by their ancestry and are from either their mother or their father. Belonging to a totem bestows upon the individual responsibilities and obligations for maintaining knowledge and ceremony. These responsibilities and obligations include restrictions on the use of the totem, including a taboo against killing and eating. They will also ensure the adoption of other practices to protect and conserve the species, including ceremonies to enhance their well-being.

Ceremonial attire, including headdress, body painting and implements such as shields, are usually decorated with depictions of the participant’s totems.

As a person moves through different stages of ceremony (and life), their relationship to their totems and other species often changed. Former taboo species may now be eaten.

The relationship with totems extends beyond the physical. Aboriginal people often look to their totems for particular signs, including ongoing association with The Dreaming. 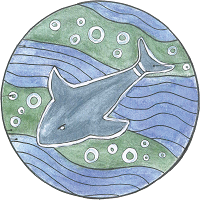 The shark is the major sea totem of all Birpai people, extending from Point Plomer in the north, to the Worimi in the south. Its significance was observed by Oxley’s expedition when Gooris refused to eat sharks that had been caught. In this artwork lineal patterns emulate the movement of water and the traditional markings carved into trees by Birpai peole. Circles represent water, and the colours depict deep and shallow water, and the river and the ocean. 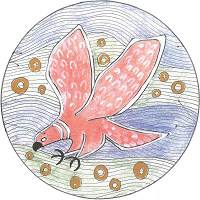 The eagle is one of the major bird totems of the Birpai, as it is with most other Aboriginal nations of South-Eastern Australia. Its significance is captured in The Dreaming site of Mt. Cairncross (Goolapatamba) – the place where the Eagle drinks). 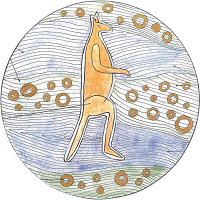 Several species of Kangaroo share totems to different groups of Birpai, with the Eastern Grey most closely linked to the clans of the Comboyne area. 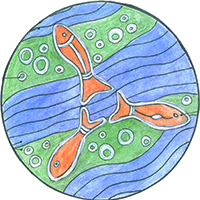 Bass are the main freshwater fish with totemic relationships to the Rollands Plains clans of the Birpai. Bass are closely aligned to the tidal estuary perch, which also features in Birpai totemic beliefs. 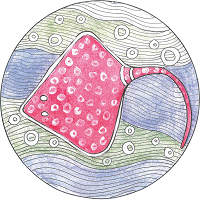 The stingray is most closely associated with teh northernmost Birpai clan around Point Plomer. Early white settler accounts relate the Stingray being speared and eaten around Wauchope. 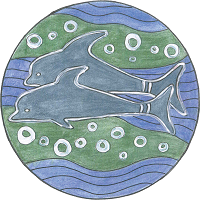 The Porpoise totem is most closely associated with the Port Macquarie clans. Birpai oral tradition records women ‘singing’ the porpoise close to shore as a method of bringing schools of fish. 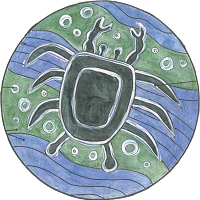 Crabs are one of the major salt water totems of the Bonny Hills clans of the Birpai. While they cannot be caught and eaten by these clans, many other species of seafood are freely available including lobsters, oysters and pipis.

Prepared by Jenssen Design for the Glasshouse Port Macquarie (2009). All designs compiled by Cheryl Robinson and designed by Marion Hampton with additional artwork by Wes Drew. All design and text copyright to the creators. Presented here as a community service and not to reproduced for commercial purposes.